You’re a marketer, a salesperson, not a writer.

Writing just isn’t your cuppa, you do it because you have to.

You need to get your point across, you want people to realise that you’re the real deal. They KNOW you’re not a professional language buff, so the occasional mistake won’t matter.

At all times, in business, you need to maintain a certain level of professionalism.

Your emails, social media posts, and blogs need to be both informative and accurate.

All of your outgoing messages should show that you deserve to be taken seriously.; and you can’t do that when your content is poorly written. 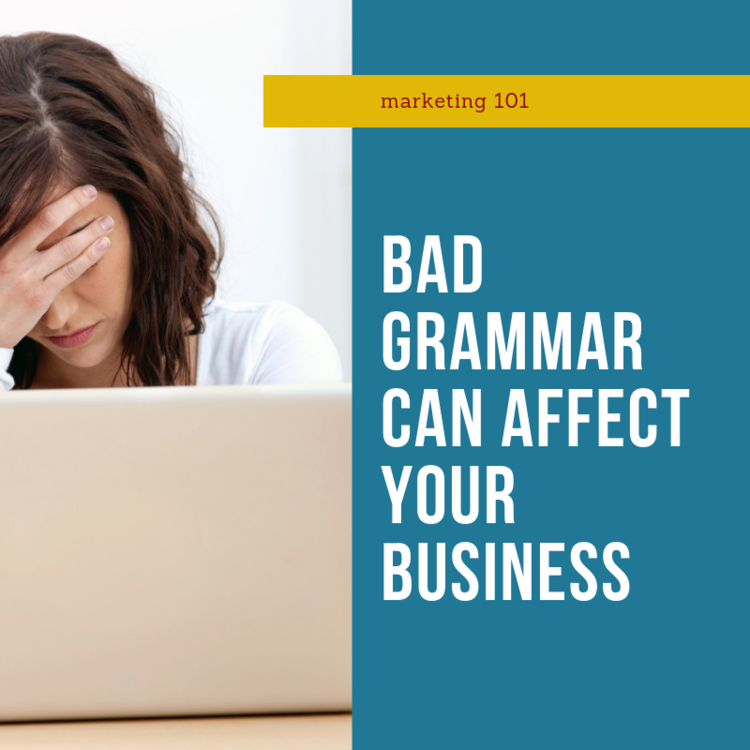 You probably feel that a business person should focus on things that are less trivial than decent spelling, grammar, and punctuation. As far as you’re concerned, you don’t need to sweat the “small stuff”.

It’s important to realise that poor grammar isn’t a small issue – it’s a pretty big one.

Here’s how it can hurt your business:

YOU COULD BE CHASING PROSPECTS AWAY

Have you ever sent out a quick email blast or replied to a potential customer without double checking your outgoing message?

Have you ever realised (after the fact) that you spelled their name wrong, missed a word in a sentence, or included a typo that could easily have been avoided?

You’re carrying across the idea that you’re too lazy to tidy up your writing. At best, you’re too busy for the 10 seconds it takes to scan through your message. At worst, you’re disinterested in the person on the receiving end, so there’s no point in making an effort.

Is that really how you want to be perceived?

Prospects who are on the receiving end of your poor writing skills will probably move on to your competitors. They don’t have any desire to spend their hard-earned money on someone who isn’t prepared to proofread a simple sentence.

Studies by Global Lingo show that almost 60% of Britons won’t use a company with poor grammar on its website.

YOU COULD BE SENDING OUT THE WRONG MESSAGE

Nothing hampers your sales quite like a misleading message.

You might not believe it, but it’s true: one mistake could change the entire meaning of a paragraph. If it’s a big enough blunder, you risk changing the meaning of your entire text.

If your prospects are confused right off the bat, they’re not likely to stick around. They’ll move on to a company that offers clarity.

You’re not going to waste your time sitting through a bad movie, if the first few minutes don’t work for you. The same applies to business. If your message is cloudy, you’re going to struggle to make a sale. Prospects are people who don’t have time to waste on trying to figure you out.

They want transparency and clarity. It’s as simple as that.

YOU COULD BE DAMAGING YOUR CREDIBILITY

Sales and marketing are all about perception.

If your marketing materials are filled with errors, you’re going to have a bad time convincing anyone that you deserve to be taken seriously.

The inability to proofread and edit your own content makes you look sloppy. You want people to believe that you take pride in your product, your company, your brand.

One of the main aims behind creating quality content is to be seen as influential. How can you be perceived as a thought leader when your outgoing content is poorly written?

YOU COULD DAMAGE YOUR SEARCH RANKINGS

Search engines have one purpose: to offer the best results for online queries. This includes displaying well-written content at the top of the list.

The theory is that if readers will find it difficult to understand your content, search robots will struggle too.

Of course, there’s also the fact that users search for specific keywords (often in a specific order). So if you’re not including the right words, you’re on a losing streak already.

Bottom line: if your content is sloppy, you look sloppy and you find yourself losing to the competition. It doesn’t take much effort to scan your emails for typos. It also doesn’t hurt to have your marketing content proofed and edited by a professional.

Take the time to invest in your image; it’s what’ll save your business in the long run.

A Time &amp; Place For All Things – Why Mobile Web Apps Can Be Better

A Time &amp; Place For All Things – Why Mobile Web Apps Can Be Better

Web Scraping Services: What's So Great About 'Em? A Time &amp; Place For All Things – Why Mobile Web Apps Can Be B...
Scroll to top

She is a strong believer in ‘if you want to write well you have to read even better. ‘ Having grown up in a big fat Greek family, she loves sharing her culture through food and smashing plates.
Lili holds a bachelor’s degree in Pharmacy and a master’s degree in Biochemistry. Having worked in many of the poorest communities in South Africa, she dreams of a society where everyone has equal access to medicine. She believes that her pen is her strongest weapon in this regard. Due to her degree in biochemistry, Lili is particularly proficient in writing about medicine and technical topics. She sees any opportunity to write as a gift. Writing about new topics and industries is a passion of hers.
Ke Poyurs
Ke Poyurs
Marketing & SEO Expert, Editor, Writer

Passionate about crafting words and images, she specializes in digital marketing strategy and copywriting, with a focus on brand-building. In her personal life, she excels at being very awkward, being an excellent cat, snake and dog-mom and watching too many Youtube videos.
With a degree in photography, she first worked as a freelance photographer for The Iziko Heritage Museum, MCQP and a few non-profit organisations before beginning her career as a copywriter at Groupon South Africa. There she got her first taste for content marketing and social media, rising quickly from Junior Copywriter to Head of Special Projects, where she was in charge of content marketing, training and other marketing efforts.
With this experience, she has honed her skills in digital marketing, social media and brand strategy and, though she enjoys all forms of writing, she prefers long-form, authority-building content related to the digital sphere.
Simone Streck


Simoné’s 10+ years’ experience in the content creation and marketing spheres have laid the foundations for an innovative and creative approach to strategy development and execution.

As a knowledgeable writer and editor, she has the ability to turn the faintest hint of an idea into an engaging, thought-provoking piece.
Her degrees in English and Linguistics, as well as her background in teaching English, enable her to view the written word in a unique way.
Having worked with companies the world over, Simoné has the innate ability to tackle writing projects of any size or scope.
Divya Singh